Spoilers but not worth reading the book anyway 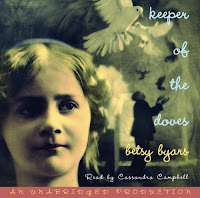 The Keeper of the Doves is set in Kentucky at the turn of the century- 1800s to 1900s, not the most recent one. It is told from the perspective of a young girl, Amy, who is the fifth of five girls in a rich family. It is a sweet story and a sad story and it takes a cheapo shot by going for the "dead dog" deal. I really don't see the point in killing off beloved family pets. It pretty much ruined the story for me. Oh, it is nicely written, a book about understanding the differences in people, yadda, yadda, yadda. But it jumps the the shark as if it's trying to be a girl's Where the Red Fern Grows. Not enough is good about the book to make it profound. It's one of those pretentious books that tries to be important by showing that people aren't all bad or all good or truth is sometimes hard to know because of perception and wacky recluses are nice or whatever but really, it just ends up being a kill the pet story.
If the book wanted to prove the power of words, it did. Put in words about a dead dog and it kills your whole book.
Posted by Ing