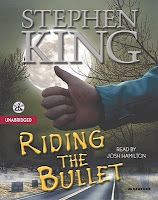 one of the reasons why Stephen King's books are SO LONG is that he truly is unable to write anything even half way interesting with fewer words.  Well, I can't say that.  No, I forgot that I have liked a lot of his short stories, but man.  Riding the Bullet was just very uninspired.  I admired the love between mother and son, and that was surprising, given that from what I have read about King he isn't really in to tenderness or kindness or anything like that.  In fact, even as the son was talking about his mother, I had the creep-tastic worry that his love for his mom was going to turn into something unhealthy, but it didn't.  But with King there is always that worry.  Still, this was more like one of the ghost stories that wouldn't even make a good addition in a kids collection of short stories.  Just pretty boring.
It did make me think though...what would I, what would most people say if death or death's messenger said that they would take you or your mom (or dad, or husband or wife or whomever).  What would you or I or most people choose?
Posted by Ing