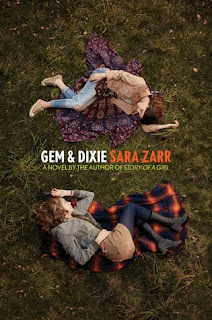 There is this part in Gem and Dixie that I can't remember exactly, but it is so true.  Gem is talking about her parents, who weren't ready to be parents and who weren't shown how to be parents from the way in which they were treated by their parents and, well that's how it ended up that Gem and Dixie didn't have capable parents.  And I was thinking about this young gal who came into the one place where I work and was a very young mom-to-be, not yet 16 and her mom was obviously drunk or under the influence of some kind of drug and also pretty young and I was thinking, this is one of those situations where it would be easy to assign blame and say that that 16 year old is troubled (she was very troubled, I don't mean the pregnant part, I mean there was just A LOT going on there) because of her own mother.  But then, I mean, who is to say what her mother was like?  Or her mother before her?  And back and back and so on.
I know one has to take responsibility but it is also hard to take responsibility when one doesn't know the first thing about what "usual" or what is "needed" or "expected."  Does that make sense?

Here is the thing about Sara Zarr, on goodreads I gave this book a 4, but I would have given it a 4.5, but if it were written by anyone else it would have been a 5+ because Sara Zarr is just. that. awesome. I have been wow'd by all of her books and I was wow'd by this one, just only a wee bit less than previous wows.  Still.  This is wow.

I guess I just really didn't like Dixie at all.  But then I kept trying to remember that she was just 14.  I still highly recommend this book.
Posted by Ing