I have a new awesome author!  Gary Soto!

Thanks to Hoopla, I have found a new favorite author.  One good for dudes, too.  And not just white dudes, this guy adds a little diversity to my reading world.

The first was When Dad Came Back and is about a young man, Gabe, who is approached by his father, who had left him and his mom years ago.  His dad is not homeless and sick, and Gabe has to figure out how to help him, while dealing with all of the feelings that come from having his long-absent father back in his life.

The second Soto is The Summer on Wheels, in which two middle school boys decide to take a bike trek from East LA to Santa Monica Beach.

The third is Crazy Weekend and features the same boys from The Summer on Wheels, this time caught in a big bunch of trouble after having witnessed a robbery.

Most recently I finished Accidental Love, from a 14 year old girl's POV and I loved this book, too.  Marisa meets a boy whom she would usually dismiss as a nerd and their young love blossoms, but it is more than a love story.

Soto is a strong writer and can write just as well with a girl's POV as a guys.

I will add Instant Winner on here, too.  Just finished that, and really enjoyed it.  Not as much as the others, but still 4 star of 5 worthy!  It's about a kid whose uncle gives him a scratchy lottery ticket and he wins, around the same time that someone in his town wins big on the lottery.  The uncle in this story is a super fun character.

Each book also gives a window into Latino culture, in these cases, Mexican.

I especially liked it when Marisa said to her nerdy boyfriend that he had to toughen up.  That he was the man!  And he wore the pants in the relationship.

She said "you wear the pants, but I tell you what pants to wear."

I am looking forward to reading and recommending more from Mr. Soto. 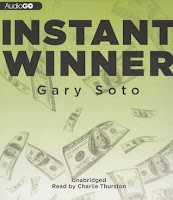