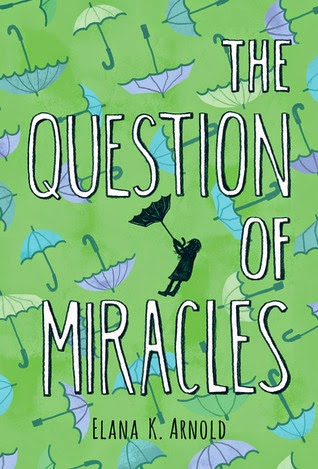 The Question of Miracles is one of the finest books I have read in a long time.  Iris is struggling with the loss of her best friend to a freak accident.  Why did she survive and why did Sarah die?
Her family moves to a remote house in Oregon where she meets Boris and learns to open her heart again to friendship.  Boris' birth is under investigation by the Roman Catholic Church as a potential miracle.  Doctors had told his parents that he would be born dead, or die shortly after birth, but he was born just fine.
As a pastor I so appreciate the questions brought up in the book.  The honesty with which they are asked, and the way that answers are attempted to be made, but yeah...there are always going to be differences of opinions and there always will be the sense of mystery.
I loved this book from start to finish.  Last year at this time I was reading the ARC of Arnold's Burning, which I also loved.  Arnold is a wonderful author.
When I was back in seminary school, I had a horrible professor, and I won't mention his name because that would be indescreet, but it rhymes with Bobert Bagnon.   He is a lot like Fred Phelps, only without a cowboy hat.  He told us a story that was a pretty poor story, but he just wasn't a good teacher, you know?  Still it fits when thinking about miracles.  Sort of.  He tried anyway.
He told this story of two different little girls.  Both were going to Disney World.  One of the girls had a grandfather who told her that Disney would be a magical place and she would get to fly around on magic carpets and real animals would talk and there would be winged-horses to ride.
The other girl's grandfather told her that Disney would be great fun, and that there would be rides and people dressed up like her favorite Disney characters and it would be a good time.
The girl with the grandfather who talked about flying and magical animals, she was disappointed and didn't have that much fun.
The girl with the grandfather that told her it would be "a good time" had  wonderful time and was blown away by the Disney trip.
Bobert "Phelps" Bagnon said that this is compareable to when we talk about Christianity and miracles and Jesus.
And we all looked at him.
I think that we all felt a little sorry for Dr. Rhymes-with Bagnon.  He seems like the kind of man who endured terrible bullying when he was a child and teen.  Having been picked on for my weight, I know that can really change you.
But we knew what he was trying to say.  Why did the grandfather have to tell all of lies, when the truth was really great as it was?  Why didn't he realize that the Disney experience was enough on its own, there was no need to add all of those other elements that weren't true, thus leading to his granddaughter's disappointment.
The thing is, as I have said before, I am not a believer in miracles as they are commonly defined.  The saving of one person from a terrible accident, while another person is killed.  The decimation of a town while a church stands tall after a tornado, that kind of thing.  A "miraculous" recovery from cancer, while another succums.  God doesn't play that way.  Even a good person doesn't play that way.  Even a sketchy person, like I can be (A LOT) doesn't play that way.
I DO believe, I DO KNOW that there is truth, Truth in THE MIRACLE.
God became flesh, dwelt among us, He took our sins upon Himself, suffered, died and was buried.  He rose again and because of this, we all will rise.  We will all live with Him in the Eternal Kingdom.  That's better than Disney World.  That's better than any earthly miracles.  That's the only miracle there needs to be.  So far beyond what we deserve.  So far beyond our full comprehension.
Madeleine L'Engle said it well, ""All will be redeemed in God's fullness of time, all, not just the small portion of the population who have been given the grace to know and accept Christ. All the strayed and stolen sheep. All the little lost ones."
Jesus said it best, John 10:16.
Posted by Ing

Email ThisBlogThis!Share to TwitterShare to FacebookShare to Pinterest
Labels: Elana K. Arnold, Faith, Grief, Loss of a Loved One, Oregon, Read in 2014, Realistic Fiction, Tween, YA