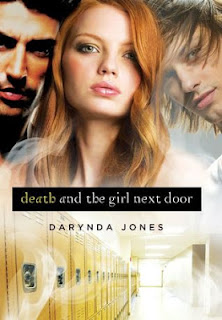 I had never read a Darynda Jones book before, but she has many fans, judging from goodreads.com.  Her adult books don't seem to be my style, but Death and the Girl Next Door is for YA and man, I really did enjoy it.  It's a paranormal deal.  Full of ghosts and demons and all kinds of beings.  But it wasn't offensive to me as a Christian, at all.  And the descriptions of the two main dudes...wow, very enticing!  It's set in New Mexico and follows the story of Lorelei, who some folks might think obnoxious, but I thought she was funny and kind and interesting.  She is also able to see bizarre visions of the future, or maybe the past...she isn't sure.   She lives with her grandparents, since her parents' disappearance ten years ago.
There's a new boy in school and he is more than what he appears to be.  He is actually well, I guess the Grim Reaper, or the Angel of Death.
And this is the first book in a series (Darklight) and while I thought I wouldn't read the second, now that I think back on how much I did enjoy this book, I know I will!
Posted by Ing