Get Me Some Kellerman 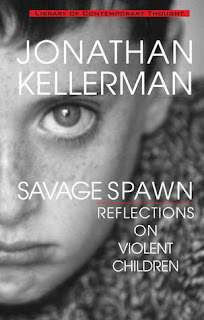 I have read a lot of Kellermans and written about them a lot, too.  Savage Spawn:  Reflections on Violent Children is an old nonfiction book.  Written in 1999, there are so many more horror stories that it would include today.  This was published just before the Columbine shooting, for example, I assume.  Although folks on goodreads remarked their surprise at it not being included, the book was published in 1999 and the massacre took place in 1999, and it takes a long process to write and publish a book, regardless of the exact date, this one was done before April 20.
In addition to being an author, Kellerman is has a PhD in Psychology and has done a great deal of work with children.  He is very informed on the topic.  This work seems like a very balanced read.  The pros and cons of nature vs. nurture, an examination of what begets violence, is it the media?  Maybe, maybe not.  Is it oppression?  Poverty?  Education?  Maybe, maybe not.  There is discussion of psychopathology as well.  A lot to think about and Kellerman doesn't claim that he or anyone has the answers. But one thing he definitely takes a stand on is children's access to guns.  He admits he has gotten a lot of criticism about this but it makes sense.  I know I always repeat the story that there was a knife attack in China in a school on the same day that the Sandy Hook nightmare occurred.  No fatalities.  Dude to strict gun laws.  Could anyone have stopped the nut who stabbed the Chinese children?  Could anyone have stopped the nut who shot the children of Sandy Hook?  Who knows?  But if the Sandy Hook nut had not had a gun....
Posted by Ing