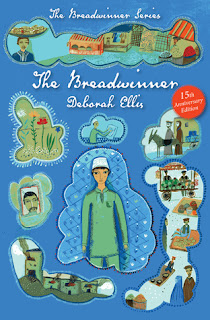 The Breadwinner was one of those books that I didn't really love when I finished it.  Yesterday when it was over, I was "meh" about it but now, overnight, I have come to see it a bit differently, as it is still with me.  I moved it from 3 stars to 4 as a result.  I didn't know it was a series until I started reading it and checked in on goodreads.
A few months ago I was at a school when a Marine was talking to a group of kids about his time in Afghanistan.  I admit, ashamedly that I didn't know much about the horrible conditions under the Taliban, except that they were horrible.  This book is the story of an 11-year old girl, Parvana, who is growing up in southern Afghanistan when it was under control of the Taliban.
When the Marine came to talk, he said that girls and women in southern Afghanistan, where he was stationed, where rarely seen and it was because of the culture of the country.  He said that it was not like that in northern Afghanistan.  It got me thinking then, well, the Taliban isn't in control anymore, so why did the Marine experience this?
It is still like that, even though the Taliban isn't in charge.  Here is a good article.  Oh man...and here is a take on gender identity that is so...beyond words?  Sad?  I don't know the right words at all..
Parvana's bravery is really incredible here.  Girls who don't live in a country where women are treated as poorly as they are treated in Afghanistan can relate to her though, as she can be saucy and mouthy to her mom and sister, just like anyone from anywhere.  I recommend it for and may or may not read more in the series.
Posted by Ing