The Lord only gives you.... 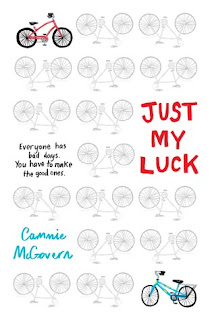 as much as you can handle.  Have you heard that before?  I have and it just makes me sick.  I bet it makes Jesus even sicker!  Just My Luck features the Barrows family who have been given a lot from God, if you believe that, which, I must make clear- I do not!
Thing is though, if that idea makes someone feel better about their own circumstances, then more power to them!  I would never judge someone's way of dealing.
I learned that in seminary when I read a book by Tex Sample and I have remembered this ever since:

I remember once in class I was making fun of the song “In the Garden.” Not only did I parody its lyrics as hopelessly individualistic, privatistic, and full of escapist spirituality, but I launched into singing it in a nasal voice with affront forethought. I was on a roll until after the class when a thirty-five-year-old woman approached me and told this story: “Tex, my father started screwing me when I was eleven and he kept it up until I was sixteen and found the strength somehow to stop it. After every one of those ordeals I would go outside and sing that song to myself: I go to the garden alone while the dew is still on the roses, and he walks with me and talks with me and he tells me that I am his own. Without that song I don’t know how I could have survived. Tex, don’t you ever ever make fun of that song in my presence again.”4

We all deal with things in our own way.

Again, I am digressing.

Anyway, this book was just so very good.  So very, very good.