I think I used to say that as a kid.  Or maybe my brother did.  Or may dad or my aunt or my uncle. Either way, whoever said it meant emergency sirens, I think.  But sirens are scary, too!  Mythological ones and all that.  In mythology, I thought they were only dangerous to men, but in Kiera Cass's new book, The Siren they are dangerous to everyone.
She does a nice job of explaining way.  The Ocean, is a mother-type figure who has to have so many lives "eaten" or "consumed" or whatever a year to keep doing her ocean thing.  Usually she can get the lives she needs from shipwrecks or natural water disasters, that kind of thing, but occassionally she must employ her "daughters."  These ladies were nearly killed in one of her siren calls but she chose them to serve her for 100 years to gain more lives for her.
Okay.  That might be hard to sell to some people.  Like the Stork series, I can see a lot of people saying, "Hmmm....yeah...okay." and never trying it.  But I LOVED the Stork series!
I didn't LOVE The Siren.  And I don't know if it will be a series or not, but probably, I would think. Cass is the author of the Selection series, which I did LOVE! I wanted to read this one because the cover caught my eye.  Not the cover above, but this one: 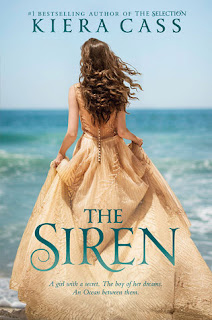 Cass's name caught my eye right away and I actually thought it was part of the Selection because the cover looked similar.  I am glad I saw this cover, or I don't know if I would have noticed this.
Totally recommend this one, though.  Good fantasy story.  Good fun!