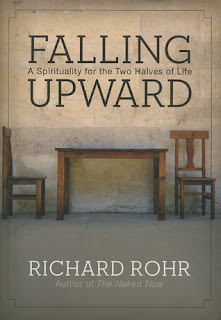 Father Richard Rohr's writings and homilies have been a great blessing to me.  Falling Upward is the latest book that I have read and it was one of the best.   He heads up the Center for Action and Contemplation.

He is not without critics.  But the people who criticize him also criticize the current Pope so he is in good company.

That Jesus guy was criticized a lot, too.

The thing about Rohr is that he makes you think.

And he doesn't disparage people who come to conclusions different from his.  So that is pretty telling.

I encourage people of all faiths and denominations to have a listen to Fr. Rohr.

This book focuses on the second half of life spirituality.  And that isn't chronologically decided.

People who have gone through a falling, and realized that they are completely in the hands of God, have given up the pursuits of the me me me me me me and focus on God, they are in the second half of their spiritual life.

What does it mean to be an elder?

Where do I fall?