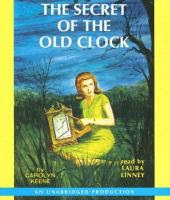 Ya gotta love Nancy Drew. There are a million websites about her and all of her books, movies, tv shows and video games.  As I listened to the first Nancy Drew book, The Secret of the Old Clock I found that I was talking to myself in a MST3K kind of way, mocking nearly every sentence read by Laura Linney. I know that wasn't fair. This book was written in 1930, revised on 1959.  The language was different, of of course. I'm sure that in less time, a year or two even, the "I know, right?" Language of one of my favorite series, LA Candy, will be embarrassingly dated. But it was fun to mock Nancy, the pleasant looking girl.
It is easy to know who the "bad guys" are in a ND novel. They are all "unattractive" described as pinched and much too thin. Which is dated in and of itself, as the hot girls in LA Candy are all described as a size 0.
You can't really review a Nancy Drew book. She's an icon. She's become more than just a girl detective, created to make money off of young girl readers like the Hardy Boys did with dudes.
One thing I did find interesting is that I didn't figure out the mystery right away. All along I thought it was one group of people, but instead it was a red-herring ending kind of like the midget in the red coat in that totally over rated movie Don't Look Now.
Will I read another? Maybe. Maybe I'll try one of the more modern ones to see how Nancy changed over the years.
Posted by Ing