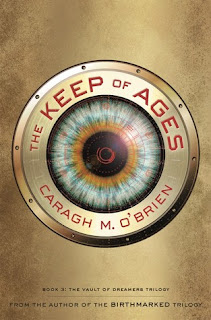 The last book in the Vault of Dreamers trilogy seemed endless to me.  The Keep of Ages just was not my thing.  I have to say though that it very well may have been the audio production and the speed at which I listened.  I had it up to 1.5 and the main character, Rosie, was just so whiny!  And so alarmist!  And just going on and on and on and in a panic throughout the whole book.  And it was really annoying.  It just ruined the book for me.  I mean, I was glad to find out how it all ended and I did care.  So it didn't ruin it, which says a lot about how much I do like Caragh M. O'Brien and the world she created here and also in Birthmarked.
I see that I had a sort-of similar reaction to the third book in the Birthmarked series and so now I wonder if it is one of those deals where the publisher made O'Brien turn a one-book idea or a two-book idea into a trilogy.  That's what I think happened with Matched and what I know happened to Claws because the author is my friend.  Still, this was a good and unique premise.  Read the first two for sure and then if you listen to the third, play it at regular speed, you might like it!
Posted by Ing