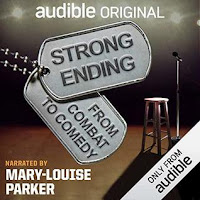 that when I started doing comedy I met some of the most unhappiest people ever.
But no, when I really think about it, it isn't that comics are more unhappy that most people, but I do think they are more aware.
You know the whole "the unexamined life isn't worth living" thing?
And "ignorance is bliss?"
Well it's true.
If you don't look too deeply, or think too much, life is grand.
And comics make their laughs by being very observant.  By picking up on the "funny" in all senses of the word (a little off, a little weird) elements in the every day.
There are a lot of "funny" things about the world in which we live.
And maybe comics who are especially good are those who are examining life, even the difficult parts.
Or maybe I just say that to make myself feel humbly superior to those who don't, instead of just admitting that I am a paranoid dork.
That could very well be true!
But Strong Ending:  A Journey from Combat to Comedy features people who have the seen some of the worst of the worst that humanity has to offer, in the from of violence.  In the form of combat.
This book is truly funny and truly touching.  I highly recommend a listen.
Posted by Ing