The Race is On 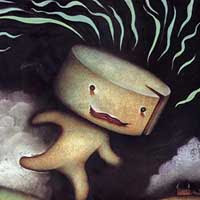 One of my favorite autumn activities is visiting haunted attractions. Last year I became quite obsessed and visited 19 in three states. This year I don't think I'll hit that many, but I hope to try some new ones and focus on visiting the best ones from last year. In South Western PA the season started this past weekend with the opening to two favorites. My friends MaryAnne and Theresa and I first traveled to Portersville, PA in Butler County for Cheeseman's Fright Farm. Cheeseman's has always been one of my favorites because it includes a hayride usually full of scares, a haunted barn and a corn maze. Hearing the dry cornstalks move around you as you make your way through the maze can be quite spooky. Last year the actors made me go alone through the maze and I thoroughly enjoyed it. The restrooms are clean and the food is good. There are pumpkins and souveniers to buy as well and the main barn is lit and decorated for the season. The tractor bed is filled with hay and you ride comfortably on bales while actors scream at you. This was the second year that I've gone on opening night.

While I will always love Cheeseman's, I must admit that it wasn't as frightening as in past years. There were hardly any scares during the hayride and the walk-throughs didn't have many actors jumping out to frighten us. The pumpkins weren't in the barn yet, though they were there on Sunday afternoon when my mom and I went for a daytime visit with nachos, hotdogs and picture taking. The Friday night scares were few and far between. Perhaps I'll return later in the season, though, to see if it improves. I did meet two really cool seniors from Laurel Jr. - Sr. High who were fun to journey with through the attraction. The nice thing about opening weekend is that for 12 bucks you can go through as many times as you like. As always, the staff was great.
We couldn't stay for a second trip through the haunt, however, as we needed to hustle to the southern end of Allegheny County to Hundred Acres Manor. On the way we picked up Pat and headed for this favorite which is located in South Park. Hundred Acres costs 16 dollars but benefits two very worthwhile charities, the Homeless Children's Education Fund and Animal Friends. Hundred Acres always has something different. Every year is new. Every year is scary. This year was their best ever.It took nearly an hour to go through a dark maze, an insane assylum, a freaky clown thing, cave and other scenes. The amount of work that goes into this place is unreal. Everything about it was great except for an actor/heckler who stood outside and swore at people. At first he was funny, then he was just vulgar, dropping F-bombs, even.The food was good, I had a pepperoni roll. The bathrooms were better than Port-o-Johns, but they were part of the park itself and so not the cleanest. Still, it was a great time.All in all, it was a fantastic way to start off a spooky weekend!
Posted by Ing