A Bad Case of Abridgement 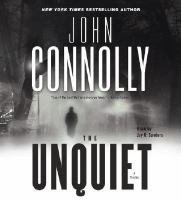 While an abridged Jonathan Kellerman book is a blessing, I'm not so sure if an abridged John Connolly novel is a good idea. The Unquiet didn't work well abridged, anyway. Next time I'll try an unabridged one and see. After reading The Gates I was excited about trying another Connolly. The over of the book on cd was fabulous and I didn't notice that it was abridged but I was too caught up in the story to stop once I did notice. Charlie Parker is Connolly's private investigator who solves crimes in and around Portland, Maine. Another name for Portland, Maine is The Only Portland that Should Be Allowed to Exist. (see this post if you have questions) I've been to, and enjoyed, this REAL Portland, and a lot of places in Maine, so it was nice hearing about familiar landscapes. I like Charlie Parker, too, and maybe I'll add him to my list of favorite detectives. First I need to find out more about him- unabridged stuff.
In this book, Charlie is hired by the daughter of a presumed dead child psychologist because she is being harassed by a man who is demanding to know her father's whereabouts. The father, Daniel Clay, specialized in helping children who were sexually abused. The book deals with the abuse of children and so it is pretty rough going and can turn your stomach in places, but it isn't graphic like Living Dead Girl.
There is a bit of the supernatural as well. I like the supernatural and I love detective, mystery type books but the only other ones I have read like that are some of Dean Koontz's stuff like The Face and the Odd Thomas books, which I love. I figure I will probably love Charlie Parker as well. This book did remind me a bit of the Odd books, in fact.
Posted by Ing